Over the past several weeks, the tumult surrounding the entertainment platform TikTok has reached a fever pitch. Global Chair of our technology practice, founding partner Jonathan Heit, weighs in…

If it seems like every day you are inundated with news about TikTok and its business prospects in the United States, well that’s because you are. Every few years there seems to be a “next new thing” the kids use, and this is certainly TikTok’s moment.

Thinking about other platforms that generated this type of attention over the years – namely YouTube, Facebook, Instagram and Snapchat – it’s important to recognize how so many of these also faced major global implications on the political and business landscapes.

However, few have been in the crosshairs quite like TikTok. Owned by Chinese parent company Bytedance, it faces incredible scrutiny. With reports on Sept. 14 that Oracle won the bid for TikTok’s technology ahead of the impending deadline for either a sale of its U.S. assets or a ban, it’s a good time to put the company under the microscope.

To show its reach and real impact, TikTok recently revealed it hosts about 100 million monthly active U.S. users . TikTok already goes far beyond “the kids” as the graphic below indicates: 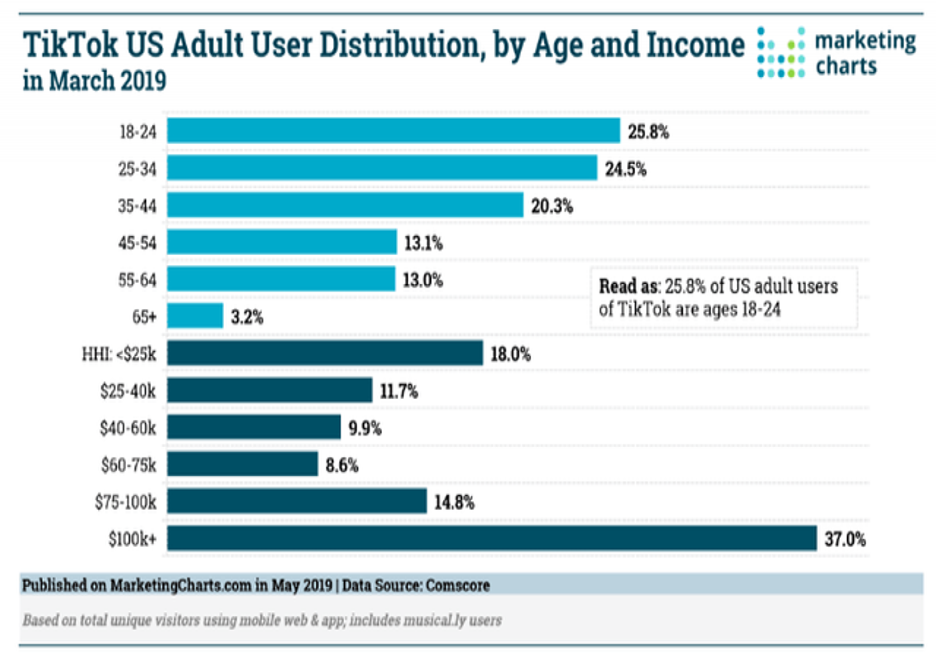 TikTok content is clearly much more than the latest dance craze for teens, though it has an extraordinary and growing impact on the music business. Its content crosses all forms of entertainment, religion, education, DIY cooking, grilling and home renovation, among many other categories. It also hosts political coverage across a broad political spectrum that actually leans right, despite the widely reported case of the pesky teen K Pop fans that torpedoed President Donald Trump's rally in Tulsa. There really is something for everyone on TikTok.

This broad reach is one reason why TikTok still manages to dominate the headlines during a worldwide pandemic, a U.S. presidential election and a historic fight for racial justice led by the Black Lives Matter movement.

Let’s review what’s gone on in just the past few months:

Whether you agree with the politics behind India and the United States’ actions or China’s countermeasures, the reverberations are undeniable. The offer from Microsoft and others were originally believed to be in the $30 billion range, and the overall valuation of Bytedance was estimated at between $100 billion and $150 billion.

Of course, these deals were all formulated prior to China’s attempts to extricate the AI from the package, which would bring the value down considerably. If you’ve spent any time on TikTok, and the chart that follows shows many of you have, you’ll recognize the value is in the algorithm.

That’s true of any social platform. But the key to TikTok is an algorithm unlike any other. Despite movements toward transparency, this is the very AI that China aims to hold onto and is at the heart of U.S. concerns, along with data security and privacy. The way the app quickly learns user interests and tailors videos for them on their “For You” page is almost eerie. Within two to three days of using the app, users get served nearly tailor-made and customized videos.

Brands, consumers, parents and the market have begun to recognize this is far more than just the aforementioned collection of fun videos set to music by teenagers. As my colleagues Pranav Kumar and Natashia Jaya pointed out in their blog here, the COVID-19 pandemic kept human interaction at an all-time low and TikTok outpaced the competition by a wide margin by bringing people together in a more meaningful way.

In terms of potential suitors, Microsoft has a good track record in consumer entertainment and social media (think Xbox and LinkedIn) and already does significant business in China. As such, it seemed to be a strong potential partner with a security legacy far better than Facebook or Amazon. Despite, or perhaps because of, its grander ambitions, Microsoft learned over the weekend its bid was rejected in favor of a less all-encompassing deal by Oracle.

Oracle is a Trump favorite. That may have played a factor in the ultimate decision, which will certainly evolve over time as the deal consummates. While Wal-Mart originally appeared to be a bit more of dark horse as a partner with Microsoft’s deal, further reporting made it clear the value this would add to the world’s largest company and the value it brings to marketers across the spectrum.

Not content to stand by idly and allow its fate to be decided, TikTok went on the marketing offensive. On Aug. 18, the company launched its boldest ad campaign featuring a mix of clips from a wide range of creators set to the song “Sing to Me” by Walter Martin featuring Karen O. The campaign focuses on TikTok’s position as more than just a personal plaything, but a platform capable of creating “a global, cultural moment that travels across countries, cultures and communities.” Furthermore, it splashed media dollars across podcasts and other channels to reach as broad an audience as possible.

Through this prism, Walmart’s involvement in this deal begins to make a lot more sense.

In a statement talking about the deal, Walmart noted this represents “an important way for us to reach and serve omnichannel customers as well as grow our third-party marketplace and advertising businesses.”

At the same time, TikTok recognizes the value of its enormous and passionate user base and upped the ante to partner more closely with agencies. It brought in a full-time team to focus on building relationships with brands and aggressively marketed “TikTok for Business” to enhance revenue-generating opportunities for brands on the platform.

Already, users have seen a variety of ads from high-profile brands. But trust and safety issues abound, not to mention the usual tension between user experience and profit-making. The platform has taken important steps to stem bullying on the platform, but it must also account for data privacy and security. This is one of the central concerns in the ongoing U.S.-China rift, and it’s a driving force in the current administration’s push to sell the American operation to a U.S. company. For its purposes, Beijing would rather see the site shut down than sold to Oracle or any U.S. company.

How TikTok navigates this and maintains its prodigious user base is an important evolution and will show its commitment to sticking around for the long haul. Will the gambit ultimately pay off? One thing is for sure. There will be no shortage of media coverage documenting every step of the way.

Jonathan Heit is a co-founder and partner at Allison+Partners, as well as a trusted adviser to some of today’s best-known technology brands. In his role as global president he focuses on the growth and operations of the agency’s two largest regions, Asia and the U.S. Jonathan also serves as global chair of the Technology practice, spearheading work in both the consumer and B2B categories.

Articles and opinions delivered directly to your inbox.